I don’t always enjoy sewing business shirts. I should. It IS still sewing (which I am obviously somewhat obsessed with), and it IS for someone I love. But I think I just place too much pressure on myself for perfection when I sew them. Lets face it, you can’t easily hide a wonky collar (try to ignore the extra stripe on mine below…eek!), add a sneaky pleat, or pretend those cuffs are a design feature. No, of course I would never do that…

Anyway, perhaps my lack of enjoyment for this make was purely down to the fact that it was an act of necessity. Poor old hubby was down to only three tired looking business shirts in various degrees of fray. I usually make his shirts in secret because I love the surprise factor. But what we won’t mention is that on day three of stitching away at this beast, said beneficiary of this shirt comes home from a shopping spree with not one new shirt, but FOUR, and two pairs of pants, AND a new suit. Whilst I must consent to the fact that he was desperately in need of ALL of those items, I also have to admit to being rather out of sorts that night.

But let’s get back to basics here. The pattern I used was Kwik sew 3883. I’ve sewn this shirt before with good results, although I did find the collar a little bit too narrow for my preference the first time round. The fit is also a little roomier than other shirts I’ve sewn for him. Oddly enough, the last shirt I made in this pattern was hailed as my all time best. Yet this time, dear hubby ‘loves‘ it (as always…and I know he will wear it until the collar frays) but he now finds the armscyes a little low and the front chest area a little large. I tend to agree (and personally thought this was the case the first time round as well). You can see this best when he has his hands on his hips. I wonder if it might be a little worse this time because I mucked up the seam allowance when experimenting with a new way of sewing felled seams. (Those are his new pants by the way).

If you follow Male Pattern Boldness, you might be familiar with the fact that Peter has been attending FIT classes on shirtmaking and has been sharing some of the things he’s learnt. I had a go at making the felled seam he described, but I think I may have miscalculated my seams slightly, allowing for a little bit of additional ease. I can see this in the slightly wider shoulders, longer arms, and lower armscye. It is a very clever method though, and my seams ARE much neater so I would still recommend giving this technique a go. I just need a little more practice.

The fabric I used is a gloriously soft (and slightly looser woven) Italian shirting from Mood. Hubby chose it himself. I love the fabric. It has a softer hand than other cotton shirtings and will be lovely to wear. It also ravels quite readily and can snag if you aren’t careful. These facts made for a more challenging sew, but mainly, it was the seam allowance in this pattern that did my head in. It was a mere 1/4″… allowing no room for error or ravelling, OR experimentation with fancy felled seams.

I made a couple of adjustments to this pattern.

I interfaced the collars and cuffs with Pro-Woven Shirt-crisp fusible from Fashion Sewing Supply. The great thing about this shop is that they sell online and you can purchase a swatch set of all their interfacing. The stuff I chose has been specifically marketed for use in shirt collars and cuffs, even though I’ve been warned that it might be a little too stiff. I’m actually a little undecided about this. I do like the collar but I might still try a different one next time.
I also did a bit of analysis on the new shirts that hubby bought home. He confessed one was to the order of $200! I was impressed with how beautifully neat and narrow the felled side seams were, while the armscye seams were a lot wider (something obviously not possible with a 1/4″ seam allowance!). In all four shirts, the collars and cuffs were actually stiffer than mine. This was a big surprise, as mine are actually very stiff with the interfacing I used. But what surprised me most, was that it appeared to be a fusible interfacing that was ONLY used on the outside piece of both collar and cuff. I can see that less bulk to turn would make for those perfectly neat collar and cuff points. But my mind boggles as to how I can obtain an interfacing as stiff as the one they used. Seriously, this stuff was like a sheet of concrete (if that’s even possible!).

Overall, I’m reasonably happy with how my shirt turned out, but I know I will have to resolve some fitting issues next time. I really don’t know how I did it, but those aligned stripes down the front placket just make me smile! So do those lovely pearl shell buttons. 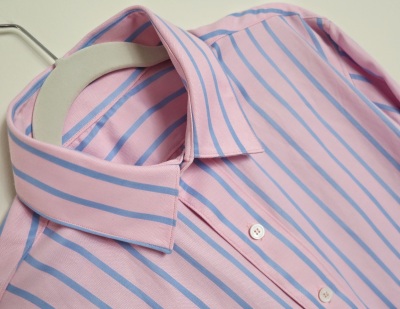 And finally, he’s going to kill me for including this shot, but just check out the ‘blue steel’ pose!