I’m pretty sure you’ve heard me say this before, but I don’t particularly love sewing men’s shirts. I think it’s the degree of perfection required with those collars and cuffs. It could also be because it’s selfless sewing and the kind of sewing that doesn’t really allow me to experiment much. I’m not allowed to deviate much from a standard pattern. Well, in hubby’s case I do. He’s a fan of classic. 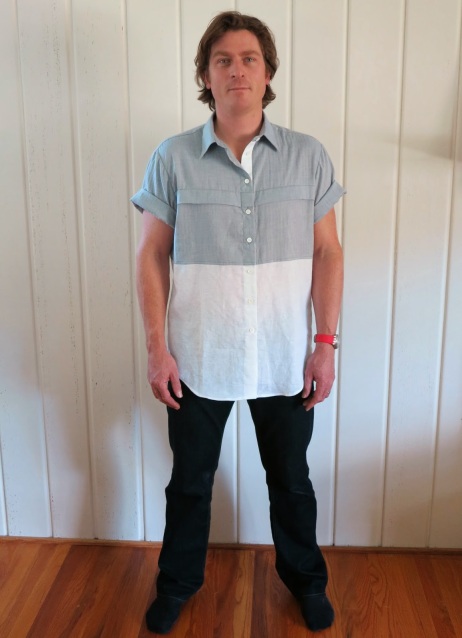 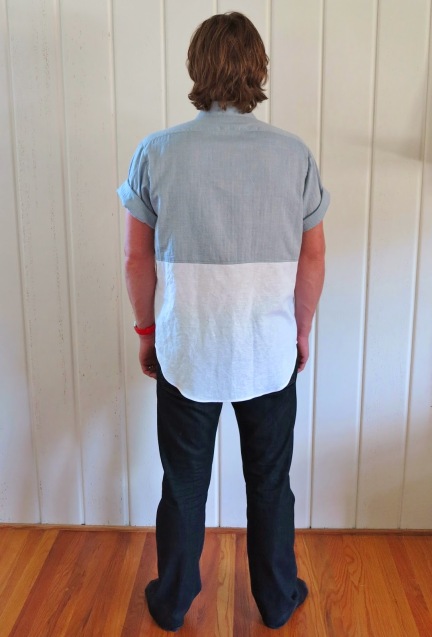 So after doing my nice-wifely duty of sewing him a proper business shirt for his birthday (that post will come later), I decided to experiment with a casual ,short sleeve shirt. I was inspired by a GANRYU COMME des GARCON shirt that I saw on Pinterest. My plan was to keep the pleats but colour block the bottom instead of the curved pocket details. I chose some Anna Sui chambray for the top and some white linen for the bottom.

The patten I used was Kwik Sew 3883. I’ve sewn this pattern before (here and here). It’s taken me until now to finally admit that it isn’t a great fit. The shirt is just too wide in the torso, and perhaps a little wide on the shoulders too. The seam allowance of 6mm is also impractical. I usually start out sewing the shirt with the wrong seam allowance. But even when I get it right, 6mm is way to fiddly for nice felled seams.

Overall, I don’t mind how this shirt turned out. I wanted to bring the sides in by about an inch to slim down the fit for hubby, but he opted to forgo my alterations and send it to his Dad (who is a little bigger than him) instead. His initial reasoning was that it was a Summer shirt and we were headed into Winter. But I delved a little deeper and the truth came out. The fact of the matter is that the chambray reminds him of his old school uniform and the colour blocking makes him feel like Charlie Sheen in Two and a Half Men. I guess colour blocked shirts are off the cards for hubby in the future then. What do you think? Have I made a Charlie Harper shirt?